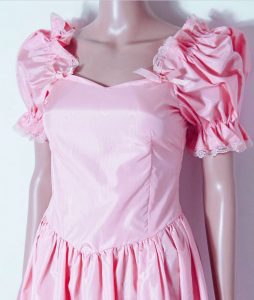 Bronwyn’s father and her stepmother had taken her on a trip to the UK and Europe to celebrate her getting her HSC. It had also been a chance to catch up with relatives and friends they hadn’t seen since they had emigrated from Wales when she was six.

Having a dual passport made it easy for her to get a work visa. After her father and Polly returned to Australia, Bronwyn remained behind pulling beers in pubs and performing at lesser known venues, festivals, and any other place that offered her an opportunity to sing. It took her seven years to become an overnight success.

‘I’ve got my mojo working but it just don’t work on you.’ Yeah, I was singing that when I was “discovered” at that Open Mic in Cardiff, and my mojo sure did work on Bernie Bolton. He might have been fat, fifty, and gay, but Bernie was a star-maker and he made me a star!

He found the right musos to back her – a lead guitarist from Dorking, a bass player from Edinburgh, and a drummer from Kilkenny. Within six months “The Choosy Beggars” had released their first album with a number one single and a second song racing up the charts. The band proved to be a smash hit at the Glastonbury and Edinburgh music festivals and a European tour followed. They worked hard and played hard, experimenting with marijuana and cocaine. When their album went platinum a tour of the States was announced. A week later Hilary’s wedding invitation arrived in the mail. Bronwyn and Hilary, known as “Mouse”, had been close through school and had stayed in contact over the years.

‘We could tour Australia as well as the US, but I want two weeks off after the Melbourne dates so that I can visit my family and be a bridesmaid at my best friend’s wedding.’ It wasn’t hard to convince Bernie or the guys in the band.

Bronwyn’s father picked her up from the Windsor in Melbourne. She soon settled in. ‘How lovely it is to be back home in Linton, though I swear I’ve gained ten pounds from eating all the fabulous food you and Polly have cooked,’ she said to her dad.

‘You look wonderful, Mouse, positively radiant,’ Bronwyn greeted her friend. Still tiny and full of energy, Hilary had cut her hair to shoulder-length and wore contact lenses now instead of glasses.

‘I haven’t been called Mouse in years,’ Hilary laughed and gave her a hug. A real hug, not a showbiz hug with air-kissing to each cheek. ‘Wait until you see Angela. She’s married to Brendan Kelly and pregnant. Five months, but barely showing. And Brian married a girl called Rhonda from Ocean Grove. We all reckon they’re having twins. She’s huge!’

‘I never thought anyone would be able to tame the Kelly twins – and Angela will be your sister-in-law once you marry Joey. I had such a crush on him in high school but even back then he had a thing for you, and he wasn’t the only one. I always thought you would marry Bobby. The two of you were inseparable. Is he coming to the wedding?’

‘I haven’t seen him since I left here to live in New Zealand. He’s been invited but he never replied.’ Hilary looked sad for a moment and then she brightened. ‘I’m so glad you could come.’

The hens’ night was low-key, but fun. Bronwyn enjoyed catching up with Angela and meeting Rhonda. The two redheads were the other bridesmaids, though Hilary told her she was worried that Rhonda might give birth before, or even worse, during the wedding.

Why do bridesmaids’ dresses have to be so Goddamn awful! Bronwyn frowned at the ridiculous puffy sleeves of her pink dress. Hilary looked beautiful in her satin wedding dress, glowing with happiness and excitement as she danced the bridal waltz with her new husband. Joey hadn’t changed much. He was still drop-dead gorgeous!

When Hilary danced with the best man, Joey danced with Bronwyn. If he felt uncomfortable he hadn’t shown it. They had gone on a few dates the summer that Hilary moved away, but it hadn’t been as serious for him as it was for her. She had been crushed when he dumped her. Luckily young hearts are resilient. Fame and a number of boyfriends in the UK had mended hers.

Still, there’s no harm in a little flirting. A little bit tipsy, she fluttered her eyelashes at him, ‘I love anything that begins with ‘Ch’. Chocolate, cheese, champagne – especially champagne, it makes me feel so … uninhibited.’

When Joey escorted her to the bar and returned to his bride, Bronwyn felt the need for a smoke and wandered outside to roll a joint. At first she hadn’t noticed Bobby lurking in the shadows. He was dressed in black, his shirt had become untucked, his tie was askew, and he was drinking from a hipflask. He looked miserable.

‘Oh, it’s you,’ she said. ‘I thought I saw you at the church.’ She passed him the joint. He inhaled and had a coughing fit. She giggled and passed him her champagne. He coughed some more and passed her his flask. She took a nip and coughed. It was neat scotch. She passed the flask back and he topped it up from a bottle he had stashed in the bushes.

They ended up at his mother’s place. ‘I work in Canberra. I haven’t been back here in years,’ Bobby said, slurring his words. They stumbled up the back steps onto the enclosed verandah, the room that he had used as a teenager when he needed some peace to study away from the noise of the twins.

‘Sh! We don’t want to wake Mother,’ he whispered, but they couldn’t help laughing like a pair of naughty school kids as they struggled out of their clothes.

‘Wake up, Bobby,’ Bronwyn shook the shit out of him but she couldn’t wake him. There was smoke everywhere and she could feel the heat and hear the crackling sound of fire. She was coughing as she rolled him off the bed and tried to drag him to the door but she couldn’t move his dead weight. She let go and began crawling toward the door. The last thing she heard before she lost consciousness was the wailing of a siren as the fire brigade approached the property.

The firies wrapped Bronwyn in a blanket and she watched as the ambos worked on Bobby. He was oblivious to her. Semi-conscious, the only thing he was aware of was the beauty of the flames as they consumed the house. ‘Pretty,’ he mumbled before lapsing back into unconsciousness.

The ambulance took them both to the hospital in Ballarat. His family will have to be told, and mine. She stayed with him as he lay sleeping in his hospital bed. I didn’t sign up for this but someone will need to be with him when they tell him that his mother is dead.

Bobby’s eyelids fluttered as she reached out and touched his hand.