‘I can’t find my left shoe. Is this a sign that I’m making a mistake? Maybe I shouldn’t marry Joey after all,’ Hilary burst into tears.

‘Don’t be ridiculous! You’re always losing your shoes.’ Bronwyn scoffed. She had been Hilary’s closest girlfriend since primary school and had flown in from the UK to attend the wedding.

‘It’s just bridal nerves,’ Rhonda looked over at Angela. ‘We had them too. We were terrified the priest would get it wrong and we’d end up married to the wrong twin.’

‘Rhonda had been going out with Brian for a week before she found out he even had a twin. She threw her arms around Brendan and kissed him in the pub. I came out of the loo and saw them and thought he was cheating on me,’ Angela told Bronwyn.

‘And I thought Brian was playing up on his girlfriend with me. I slapped Brendan.’ Rhonda laughed. ‘Neither one of us would have spoken to either of them again if it hadn’t been for Maureen sorting it all out. Have you invited her, Hilary? She can be a bit of a pain when she gets drunk, but her heart is in the right place, well, most of the time.’

‘No. I’m sorry, I know she’s your mother-in-law, but I can’t forgive her for all the trouble she’s caused our family.’

‘Your father might have had something to do with that too,’ Bronwyn, always blunt, called out from the ensuite. ‘Oh, here’s your shoe. It was in the cupboard under the basin. What on Earth was it doing in there?’

The service was beautiful. Johnno’s feeling of pride was intermingled with the sadness of his imminent loss as he walked his daughter down the aisle. The groom lifted the bridal veil and Johnno blinked away a tear when he saw Hilary’s radiant face.

The three bridesmaids had done a fantastic job of decorating the Linton town hall for the reception with the help of the Kelly twins who were Joey’s groomsmen and the best man Kevin, a work mate of Joey’s from Melbourne. After the dinner and speeches were over Bronwyn’s father and stepmother joined the band on stage to sing a duet they had written especially for the bride and groom. Their voices are superb. I miss singing with Dad and Polly, Bronwyn mused.

Joey led Hilary onto the dance floor for the bridal waltz. In the background Bobby watched as the newlyweds danced. She will never be mine, not now. No one noticed him slip outside. The arrival of a drunken Maureen also went unnoticed. She was partially obscured by a large Monsteria pot-plant as she stood near the door watching the proceedings.

Hilary was dancing with her father, the twins danced with their wives, and Bronwyn danced with Kevin. The band began playing a faster number. Brendan and Brian led their pregnant wives away from the dancefloor. Rhonda was relieved to be sitting down again. Her back hurt and she had been having contractions since the reception had started. Braxton-Hicks, I’m not due for another six weeks.

Brian went to get himself a beer and refill the water jug. Rhonda watched the dancers. Now Hilary was dancing with Kevin and Joey was dancing with Bronwyn. Joey must have said something amusing because Bronwyn was laughing. She looked up at him and fluttered her eyelashes.

It’s a good thing she is flying back to the UK at the end of the week, Rhonda thought. Joey reclaimed his bride and Bronwyn disappeared from view, swallowed up by the crowd.

In the kitchen, Johnno was making a coffee for his girlfriend. Sally was a recovering alcoholic and the daughter of Maureen, his son Bobby’s mother. He had been seeing Sally for the last four months down in Geelong. She had moved there from Ballarat shortly after Belinda, her youngest child, was born.

‘How are you coping?’ Johnno asked.

This was the first time Sally had seen her children since the courts had deemed her an unfit mother. Her older sister Polly had been fostering them in Linton while Sally remained in Geelong attending AA meetings and trying to get her life together. She had been sober for nearly two years now and Johnno had faith in her. She felt almost worthy of a second chance with her kids, and maybe deserving of a second chance at love too.

‘Belinda is pleased to see me but the others are wary.’

Polly stuck her head around the kitchen door. ‘Hilary is about to throw the bouquet,’ she told them. Johnno took Sally’s hand and led her back into the hall.

Maureen stood with a drink in her hand amongst the crowd at the bar. She watched with narrowed eyes as Johnno and Sally made their entrance. They walked in just as Hilary, with her back to them, tossed the bouquet toward the group of single girls on their left. She threw wildly and the bouquet headed straight for Sally who caught it easily.

‘You’re going to be the next to get married, Mum,’ twelve-year-old Belinda giggled with delight. Sally looked at Johnno and blushed. Maureen sidled closer.

‘Will you?’ Johnno asked Sally. ‘Will you marry me? I know I haven’t got the greatest track record for marriage, but you know what they say … third time lucky!’

That was the moment when all hell broke loose.

‘It should have been me!’ Maureen screamed and flung her drink. The thick glass base struck Johnno between the eyes and knocked him out. Sally sat down beside him, cradling his head in her lap. Maureen lunged at her daughter in an attempt to scratch her eyes out, shoving Rhonda who had been on her way to the toilet. Rhonda fell against a table and doubled over with pain. Brendan and Brian grappled with their mother. A solid woman, Maureen lashed out violently. It took both of them to drag her from the hall. Angela helped Rhonda up. There was a pool of water at her feet.

‘My waters have broken,’ Rhonda clutched at her stomach as a contraction ripped through her. Kevin raced after the twins. He reappeared with Brian. Brendan took his mother home. Brian took his wife to the hospital. Polly and her husband rounded up Sally’s kids and took them home.

When Johnno opened his eyes, concerned faces swam into view. His daughter’s, his son-in-law’s, and Sally’s. Two of each face. He felt dizzy and nauseous. Then his vision cleared. Only one of each face.

‘Your timing sucks, but yes, I’ll marry you,’ Sally said.

Kevin drove the newlyweds to Melbourne. Joey and Hilary were going to spend their wedding night at the Sheraton before catching an early morning flight to New Zealand for their honeymoon.

‘A quiet country town, you told me. Nothing ever happens in Linton, quote un-quote. How much excitement could you possibly want? 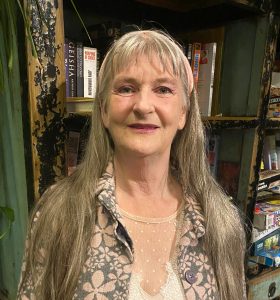