She recognized him immediately he got onto the train. She hadn’t seen him for nearly forty years, but he was unmistakable. Unmistakable. A funny word to use for someone who’d been the biggest mistake she’d made in a long life of them. He sat further down the carriage. Just the two of them in the whole carriage – possibly in the train. Him getting ready for the train to leave, her finishing cleaning it.

For a while she found it difficult to take her eyes off him. How could he go through forty years of life and hardly change at all? Perhaps rather better dressed – in fact he was very well dressed now that she was looking closely. A nicely fitted suit, pressed shirt, tie and shiny, shiny shoes. She could remember what he was wearing all those years ago too. In fact the last time she’d seen him – the very last time in her parent’s bedroom – she had watched while he dressed. Through the tears she had seen him pull on his jeans, button his blue denim shirt, slip his runners onto his bare feet. No socks. She stared at his feet now trying to glimpse his socks. The thought occurred that he still wore no socks. She could see them now as he recrossed his legs,  black perhaps.

He looked prosperous. She wondered why he was on the train at all. What had he been doing for the last forty years? She thought back over her forty years. What a mess. One disaster after another. What was it he’d said to her as she lay there weeping? What had he said? She couldn’t remember. There were lots she couldn’t remember about that day. Probably a good thing. She remembered her mother catching her washing the sheets. She remembered her father hitting her. Again and again. She remembered the baby being dragged from her later, both of them screaming. Inside she’d been screaming ever since. And where was her baby now? Her forty-year-old baby. His forty-year-old baby.

Her eyes misted over as she thought of the long years in between. Of being abused by other men. Some women too. And the self-abuse. Drugs, alcohol. Only in the last few years had she managed to reach some kind of peace within herself. Her flat, the cats, her job. Her shitty cleaning job. But it paid the rent, let her close a door on the world outside and gave her solitude. No one to trouble her now. She felt free of all that. Free of other people. Safe.

She looked again at James Bradley down the carriage. He was writing in a notebook. It was hard to see him so unchanged while she was… Well, she was very different from the pretty sixteen-year-old of forty years ago. Very different. What sort of life had he led that allowed him to look so untouched by it all? And what was he doing on this train at 6 in the morning? She cleaned this train every day and had never seen him on it before. Jesus, he’d unsettled her. Stirred a whole load of stuff within her that she’d managed to suppress for years.

Now she remembered what he’d said as he looked at her crying in her mother’s bed. ‘That was the worst fuck I’ve ever had,’ he’d said. ‘I’d keep it to yourself from now on if I was you.’ The worst fuck he’d ever had. It was the first one she’d ever had. He’d been seventeen then. How could he look the same at fifty-seven? She stared at him. He was older, of course. Grey hair in parts, some sag in his features and using glasses while he wrote. But the same really – just the same.

Christ, she thought, I hope he doesn’t catch this train every day. That would be too much. She wouldn’t be able to avoid him. She couldn’t give up her job. It was her lifeline. But no he wasn’t going to do that. Surely not. People like him didn’t go to work at 6 in the morning. It was only poor bastards like her who did that. Not rich bastards like him.

Thank god he didn’t know who she was.

Actually, looking at his brief from work, James Bradley knew exactly who she was, although he had no idea he’d ever met her before, let alone ruined her life. She was Margaret Thomas and she’d been cleaning the trains at this station for just over five years. He was glad she didn’t know what he was up to – doing a bit of a study on cost savings across the transport sector.

He glanced up at her. Why does the old bag keep looking at me, he wondered? It’s almost as if she knows what I’m doing. But this is ridiculous. It’s taken her close to half an hour to clean this one carriage. He looked at his figures. They’d be mad not to go to contract. Mad. Fuck her. 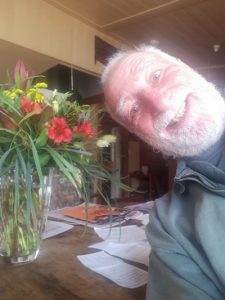 I’m Paul and I moved to Geelong earlier this year after 33 years living in Port Fairy. I have done – and am doing – lots of different things with my life. My first creative writing piece after school was published in the Mid-Herts College of Further Education student magazine, Sqog, in 1962. Writing under the pseudonym of Ivan Itch, my first sentence was: ‘I’m fed up wiv orl this tork about luv an secks today.’

Have I moved on? That’s for you to judge.