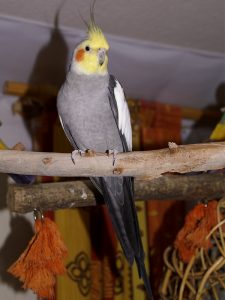 He flew into our lives and hearts, all fluffed up feathers, noise and attitude. Our household would never be quite the same.

We decided the Cockatiel was the best choice, a species renowned for its friendly disposition and out-going behaviour.

It was a difficult buying experience, due to delivery delays. There were repeated excuses as to why the local pet store couldn’t supply our order, despite having paid a substantial deposit. Finally out of exasperation we asked the manager to become personally involved. ‘My deepest apologies,’ he began, ‘but we’ve had substantial breeding difficulties with the survival of new-brood chicks.

‘We understand, I replied, looking over to my wife. ‘But it was to be a birthday surprise in two days’ time.’

‘Let me see what I can do,’ he said, ‘I’ll call you later this afternoon.’

He called with good news. ‘Our suppliers still have a three week delay in delivery, ‘he said. ‘However I have a beautiful male juvenile at my home, which I had planned to keep. Given your circumstances I will make him available, so meet me at the store tomorrow at 2.00pm.’

Cockatiel – Nymphicus hollandicus – genetic biological research has confirmed, the Cockatiel is actually a member of the cockatoo family. Early European explorers were so captivated by the birds beauty they named it after the seductive mystical nymphs. How right they were with their eloquent descriptions. A beautiful bird with a slender streamlined light grey profile and flashing white shoulder patches, bright yellow face and crest, and distinctive orange ear patch.

At thirty centimetres long and weighing just one hundred grams the Cockatiel is tiny. What was seldom mentioned was the bird’s gregarious nature and friendly interaction. It quickly became a cage-bird favourite, and few early-settler homes were without this rowdy companion.

It was time for my wife to meet her birthday gift. We met the manager as arranged, and at first sight of the bird we were smitten. He was everything and more than we expected. ‘I’ve started to socialise him,’ he said. ’He’s used to having his cage as a refuge, but now I leave the door open and he comes and go as he wants. They’re very clean birds, and unlike budgerigars won’t litter your home with droppings, always returning to the cage when nature calls.’

Barely listening and besotted we could only nod politely, unable to take our eyes from this beautiful creature. He was already making eye contact, and chattering away to himself. Smiling indulgently the man went on. ’I see you’ve bought a new cage, perhaps when you get him settled come back in a few days and we’ll go through his feeding regime. Good luck, be careful, and make sure you keep him safe indoors.’

As we walked in the door, my wife turned to me and with a hug said, ’Thank you for such a wonderful birthday present, I think he’s marvellous’, and in a nod to her Scottish heritage announced, ‘I’ve decided to name him Jordy.’

We hung his cage from a stand in a sunny corner of the living room, which was to be his permanent location.

Our two dogs, Samantha a Maltese, and Chihuahua Monty were most curious. They sat at the base of the cage stand, and in silence heads raised, stared and stared at this strange new arrival. In turn Jordy stared right back, hanging upside down at a precarious angle from his swing.

‘Do you think they’ll hurt him, he’s not very big?’ said my wife with a concerned look.

‘Laughing at this comical charade I said, ’Let’s leave them to it, they’ll sort things out.’

Initially we kept him caged, and then opened the door. It took another few days until early one morning when I walked into the room, as silent as a shadow he appeared on my shoulder. ‘Have have you decided to say hello pretty boy?’ I said. His response was to nibble my ear lobe. And there he stayed, as I prepared my breakfast cereal and morning coffee, returning to his cage when I sat at the table. This routine was repeated for several days, until he decided to remain.

I had an idea. ’Do want some breakfast Jordy? Another ear-lobe nibble. I spooned out some dry cereal onto a plate, but other than a throaty murmur no response. Then, as I started to eat he joined me, tucking into the cereal. From that day, Jordy and I shared breakfast. I mentioned this to the pet shop manager. He smiled, ’It’s why people love these endearing little birds, they’re very sociable and it’s quite obvious he’s bonded with you.’

Every day we noticed changes as he adapted to his new surroundings, and increased in confidence. He interacted with both of us, always nearby or perched on our respective shoulders, but would never leave the living room … this was his personal realm. He studiously ignored the dogs, quite often casually floor-walking past them, as if daring confrontation. He also delighted in chewing on anything and everything, television and speaker cables being a favourite. To prevent injury and expense every exposed cable required spiral-wrap protection.

However this was small price to pay for the pleasure he provided. Like doting new parents we anticipated his first words. This milestone occurred one morning when in answer to my ‘Good morning Jordy,’ his reply as though scripted was as plain as day, ‘Hello, pretty boy Jordy.’

He developed an extensive vocabulary, and in tribute to our youngest son whom we had lost in tragic circumstances a year before, I taught him to whistle the Collingwood club song. He mastered this with aplomb, and nearly drove us mad with his repeated renditions. He also mimicked sounds, and had us reaching for our mobile phones when hearing the message chime, or looking to see if we had left the wall oven on, or indeed if someone was waiting at the front door.

In the evening we would cover his cage which signalled the day’s activities were over and it was now sleep-time. Like a dutiful child, he complied, until after several weeks he developed the annoying habit of sotto voce repeating his full repertoire, until one of us while watching TV would shout in exasperation, ‘for god’s sake shut up Jordy.’

I noticed that he wasn’t as bright as usual, and reluctant to eat. We took him to a recommended avian vet, who found he was seriously underweight. An X-ray showed he had ingested paint flakes, which after checking, we found came from a portable clothes drying rack. ‘It’ll be touch and go,’ said the vet. ‘We’ll need to keep him here for several days on a special diet to see if we can get him to pass the paint-flakes. They have the potential to kill him.’ It was with heavy hearts we drove home, knowing full well we may never see again our chirpy companion.

The phone call came with the vet’s assurance that Jordy had weathered the health crisis, and was starting to eat.’ We knew he was getting better, she said, ‘when he started whistling the Collingwood club song. We’re all Carlton fans here and he’s driving us nuts. Come and pick him up in three days.’

We had missed his company, and I felt he’d also missed ours. He was his usual affectionate self even starting to interact with the dogs. They made their own arrangements, and during the day moved to my study at the far end of the house, rather than tolerate this noisy interloper.

Samantha was fully accepting of Jordy, but Monty would insist on stalking him, until Jordy with exquisite timing would fly to a higher perch as he was about to lunge. One evening sensing that Jordy was in danger, to our amazement, Samantha herded Monty away with a low warning growl.

The months flew and household harmony prevailed, he was a delight, and warmed our hearts.

The morning activities were normal, as my wife opened the outer laundry door to the clothesline. Assuming Jordy had remained in the living room she stepped outside carrying the basket. A flash of colour caught her eye and she turned to see him disappear over the house roof, carried away by a strong wind gust.

We never saw Jordy again. I trudged the surrounding streets whistling his favourite tune, circulated notices with photos, and placed ads in the local papers, all to no avail. Our sorrow at his loss was palpable, but after several weeks we had to accept the fact, his time with us was over.

In that grand order of the universe, he came into our lives during a time of personal darkness. He brought light and hope where there was shadow and despair, and enabled us to once more laugh aloud. Our sincerest wish is that he’s found a home in similar need … we hope for their sake they barrack for Collingwood. 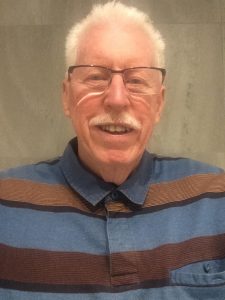 Kevin Drum is an avid aspiring writer. The eldest of seven children, he was born in 1944 in the tiny New Zealand town of Raetihi and emigrated to Australia in 1967. He satisfied his passion for big trucks working for truck companies, beginning as a mechanic and relief driver, then as a manager. From 1980 until his retirement in 2016, Kevin was in business, first in Mt Gambier, later in Melbourne.

A proud father of two wonderful daughters, with four granddaughters, and happily married to his beautiful wife of nearly twenty-five years, who also brought her two sons into his life, Kevin enjoys all types of reading, with a special interest in history and biographies. He enjoys sport and played rugby, but has now switched his allegiance to Australian Rules Football as a Sydney Swans supporter.

Kevin started writing ten years ago with letters to newspapers, commenting on current affairs which he continues to this day. He also commenced a personal memoir, but soon realised he needed guidance and skills improvement. He was a member of Melton Wordsmiths for several years, and joined Belmont Page/Geelong Writers after relocating in 2017 to enjoy life in retirement at Drysdale on the Bellarine Peninsula.